“It is not the mountain we conquer, but ourselves.” —Edmund Hillary

When we steer through the roads of Regents, the towering procession of the Sugarloaf Mountain often falls in our view unnoticed. Albeit the unfortunate mudslide that is associated with it, the mountain’s formation is dazzling and its trails offer this abysmal forestry and steep climbs that are both soothing and nerve-wreaking. It is the perfect spot for the serenity seeking-hikers-and-the-cliffhanger-obsessed-adventurers.

It was on a Saturday morning that we decided to conquer ourselves in the form of the Sugarloaf Mountain. We gathered at the foot of the peak, over a dozen of us, male and female, black and white, young and not so young adults formed this galaxy of hikers. Those who knew each other stood chatting as we prep for the hike. For some of us who had done a far more exhilarating hike such as the Pickett Hill, our perception of Sugarloaf Mountain was nothing short of a quick-sprint-hiking.

From what I could savour from the chitchats, it was apparent that the hiking trip is both an escape and a workout event for some. Such an idea was anticipated, because, these days, there’s so much constant mental stimulation and muscles contraction activities in the bustling demands of the urban lifestyle. It has almost replaced the desire for body-drillings, adventures and mind-relaxing ordeals such the one we’re about to embark on. The hike to the sugar loaf Mountain was the third instalment of the Movember hiking series organized by Visit Sierra Leone (VSL TRAVEL).

The hiking began some minutes after 8 am. About 4 of the Regents community youths and our main hiking guide Mr Fortune lead the way. Over a hundred meters, we only could see what’s left of a grazed vegetation. Human habitation has occupied most of the shores of the mountain. When we left the obvious trail, we make a sharp right turn, ascending a slightly shallowed sloop. It was there, the hiking became intense. For we’ve left the human world and we’re now in the face of the wild.

In the wild, the landscape was an appealing vista of dense Ivy, sturdy soil and rocks and heaps of gallant trees and plants. As we advance towards our goal, the group started to gradually divide itself. The overzealous and fast-paced hikers become the frontrunners, the not so overzealous and mild-paced hikers took the middle space while the lethargic and “what tha hell am I doing here?” Hikers were kicking it slowly but steadily moving towards the goal (to reach the mountain top).

After about 20 minutes into the hike, we arrived at the most incredibly terrible stretch of steeped-rock-plain I’ve ever seen in my life. The hill was almost standing upright, with icy-stream of waters gently trickling down musically. If someone were to slip and fall from atop of it, that person will stumble right down to the bottom uninterrupted. While some of us stood there for a while calculating our tricks that should best suit this cliffhanger-like-climbing, the community guides started to race up the hill seamlessly. We were amazed at how easy it was for them. At that time, our main hiking guide had decided to stay behind to coach and coaxed the relaxed hikers.

With our distinct ideas on how to get to the top, we unhurriedly crawled up the upright hill. Some people were moving in zig-zag while others decided to face it straightforwardly. “We don make am na life” (we’ve made it in life) someone shouted as we vanquished that segment of the mountain and everyone laughed hard at that. At that moment, we were all drenched in heavy sweats and even some hikers we’re still trying to catch their breath. A few of us fall on our knees, dived our hands into a pocket of stream carved out on the rock and hurled waters — dashed it on our face and then fall flat on our back relaxing, bathing in the fresh wind of the jungle while we enjoyed the scenery.

From that place, the view was astounding and gracious. We could see the trails we have defeated, covered by huge jungle and the voices of the relaxed hikers could be heard in reverberating echoes. As we began to get comfortable with the view, one of the community guides told us that we’ve more grounds to cover and where we are now is just the first floor. Everyone was dissatisfied with those comments. Even though we were determined to reach the top, our muscles had relaxed a bit and we felt like the grounds we’ve covered had tested our agility enough — therefore, there’s barely anything left in us to champion the remaining hike.

After a short while, a few of us mustered some courage to continue while the others decided to rest some more and wait for the others who are behind to catch up with them. The journey to the last floor which is the top of the mountain was the most challenging part of the hiking for us, except for the community guys. They were literally flying up the slope. “It may interest you to know that during the festive seasons, we come up here with a generator, musical sets and food and drinks to organise a party,” one of the guides said. We couldn’t even get our thoughts to imagine how daunting such an exercise would be. The last mile to the top wields an even steeper climb. It is almost as if you are ascending an unending flight of abject vertical stairs. With sour muscles, we managed to drag our bodies to the top. And when we finally reached there after some 30 minutes into the hike, behold, our eyes come face to face with a sight so grand and exquisite, that we forget all the difficulties it took to get there.

The spectacle at the ceiling of Mount Sugarloaf is just wow… It is the most stunning display of nature’s handiwork. The scene is filled with an uninterrupted overlapping of hills and lush greenery. In the countenance of that setting, an hour could easily go by unnoticed for it’s lit with serenity at its best. We stood there, basking in the view, doing all the world poses for the cameras and relaxing while some of those that were left behind catch-up with us. They relate the stories of how others decided to turn back. We all joined together, make good memories of the experience before we descend the mountain. The entire hike took just over an hour or more to do. Going down the mountain seem easy but tricky because of the steep slopes. Before we set out to descend the peak, we advise ourselves to move cautiously. And cautiously we move knowing fully well, at that particular moment, we’ve conquered ourselves. 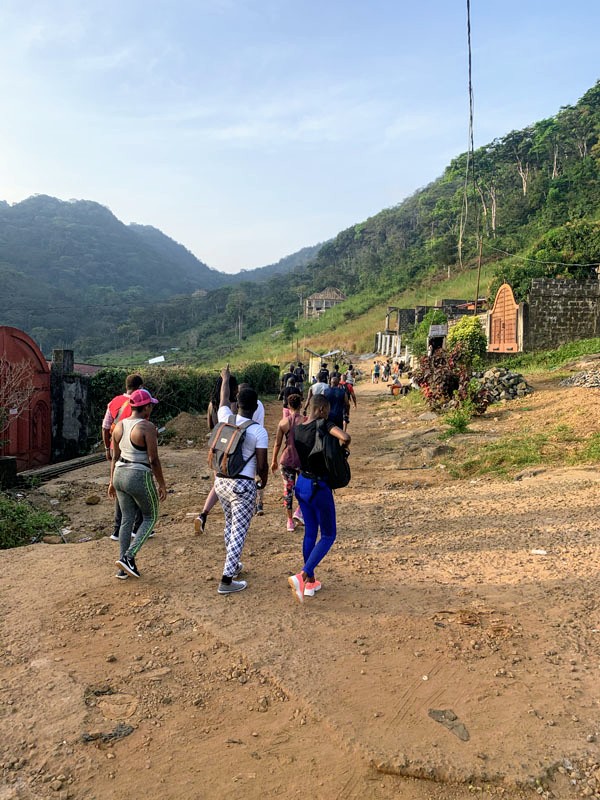 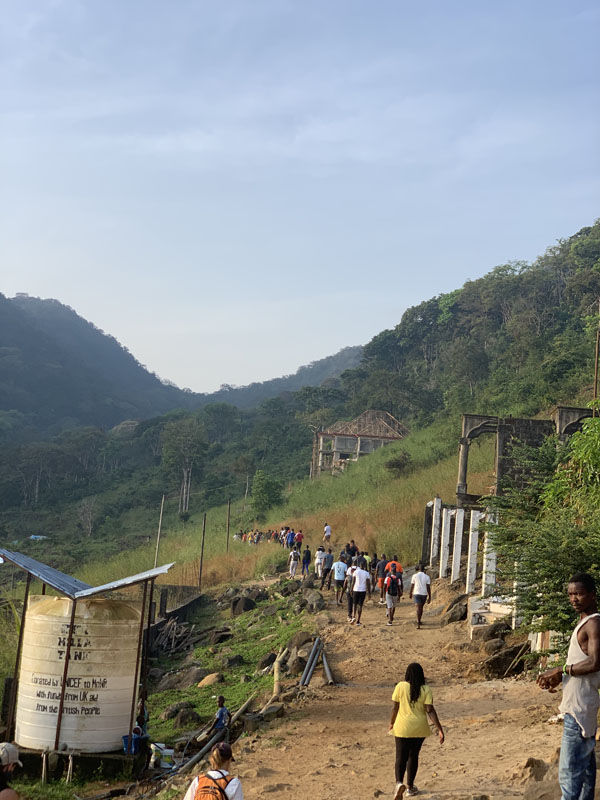 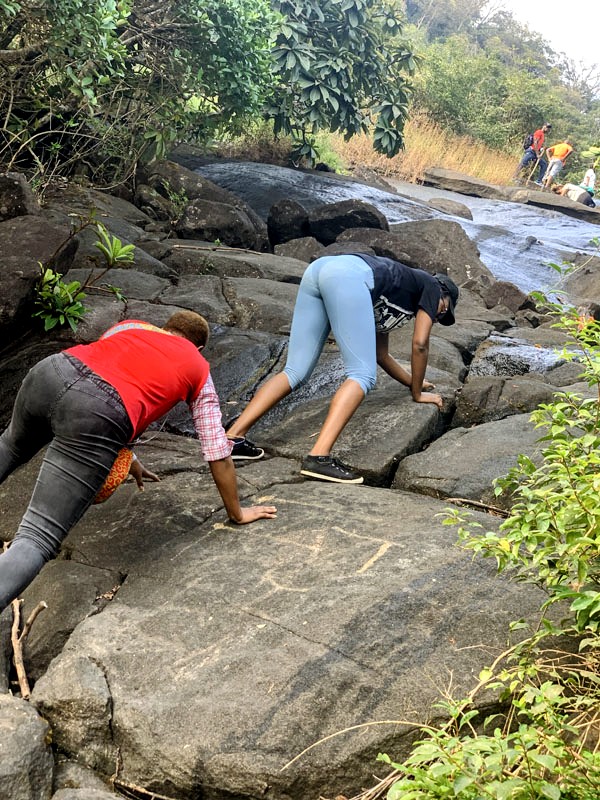 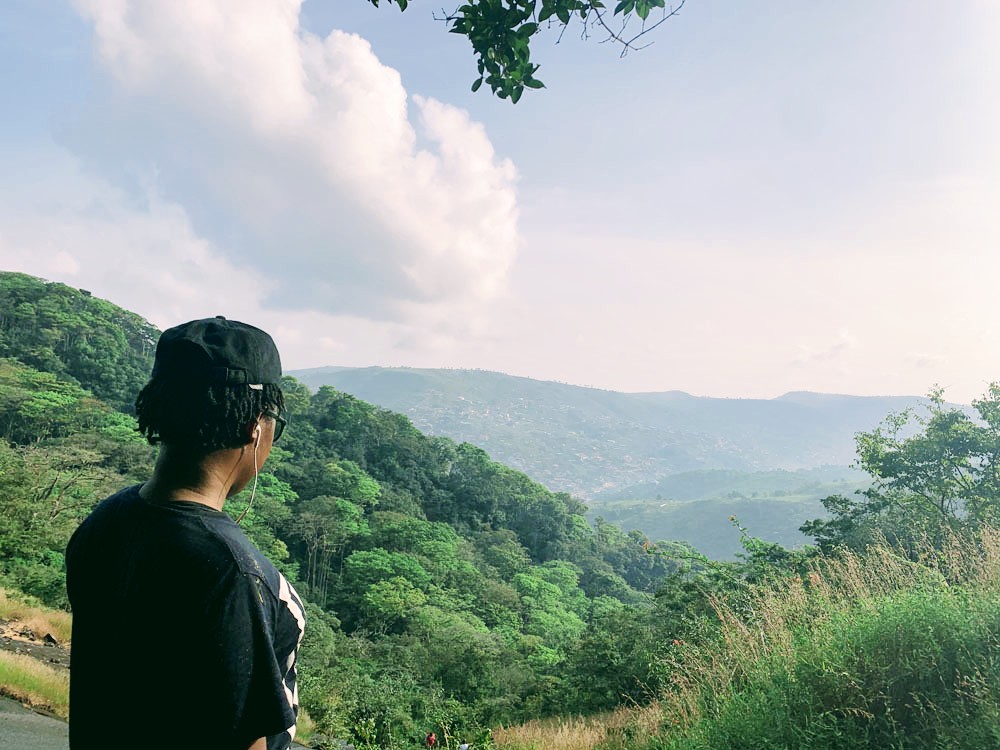 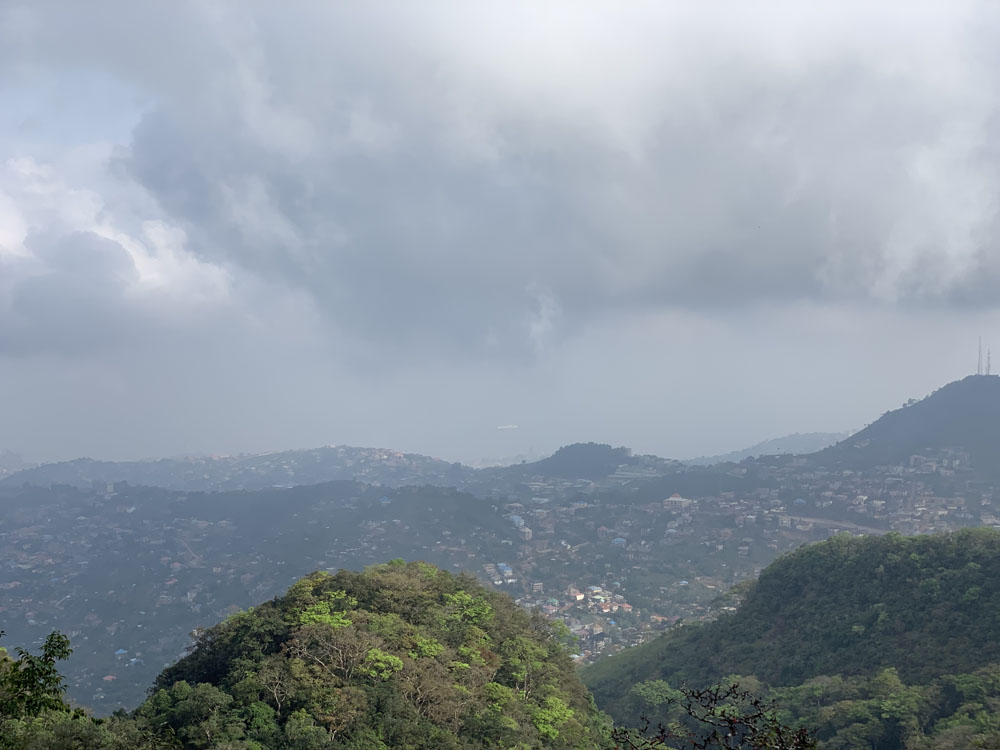 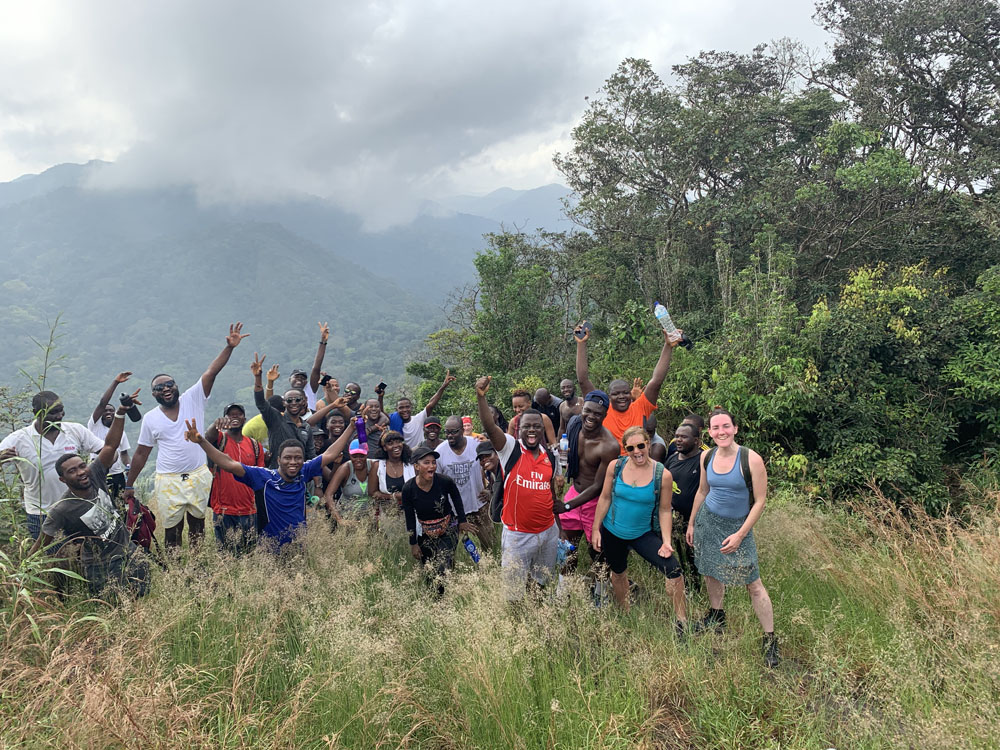 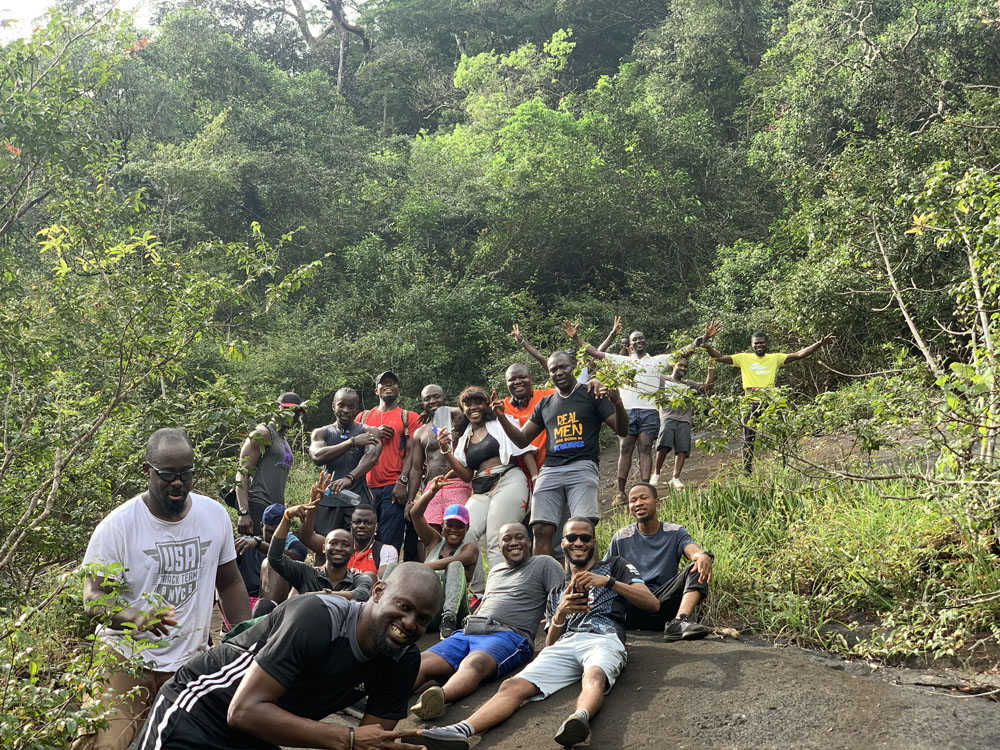 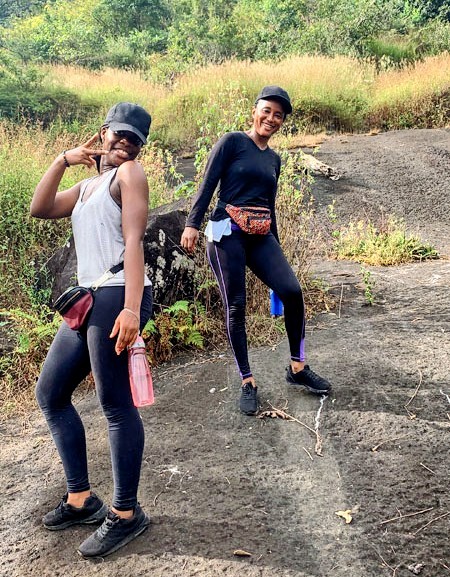 Kemurl Fofanah is a Sierra Leonean born freelance writer, poet, researcher, and conflict resolution enthusiast. He has been writing professionally since 2015. He has worked with several national and international media houses and a company such as Music In Africa, SL Mining Ltd, SLWS, PoetsUnite Worldwide, etc. He holds a BSc degree from Fourah Bay College and currently lives in Freetown Sierra Leone.
PrevNext