Bunce Island gets an overdue and much needed upgrade [with photos]

Bunce Island is one of the most significant heritage sites in Sierra Leone and a unique cultural monument to Africa’s intersection with the United States and the wider Atlantic World. Located about 17 miles upriver in the Sierra Leone River the island was a center of British slave trade in West Africa from about 1670 to 1808, and one of the most lucrative slave trading operations on the coast. It bears witness to this dark period in history.
Ongoing degradation caused by severe climatic conditions, unchecked vegetative growth and general neglect threatened the physical integrity of the site. There had been various efforts to preserve the ruins at the island since the 1940s but without significant funding these efforts only had limited success.
In 2017 the Monuments and Relics Commission (MRC) teamed up with the US based World Monuments Fund (WMF) to submit a proposal for funding of the preservation of Bunce Island to the U S Ambassador’s Fund for Cultural Preservation. Following the award of the grant in September 2017, implementation of the project officially commenced in December 2017 with a ceremony on the island attended by the US Ambassador to Sierra Leone, Hon. Maria Brewer, and Mr. Raymond Gbetuwa, Permanent Secretary at the Ministry of Tourism and Cultural Affairs.
The preservation project at Bunce Island had three main objectives: first, to carry out physical conservation at the site based on international best practices in order to preserve it for future generations; second, to improve visitor facilities at the site to encourage visitation; and third, to carry out an education outreach program in local schools and training of craftspeople and tour guides. As a result of this project, a large section of standing ruins has been stabilized, visitor infrastructure has been created, including a landing jetty (funded by the Sierra Leone Government), a Visitor Centre, pathways, and information signs will be added soon.
Preservation at Bunce Island is an opportunity to help alter perceptions of Sierra Leone, contributing to the country’s economic revival and will ensure the survival of one of the most important heritage sites in West Africa with strong cultural and historical links to the US.
Following all official protocols work finally got underway on site in January 2019 and was completed in July 2020 due to delays caused by the Covid -19 Pandemic.
As part of the preservation project interventions were made across the entire site, including cleaning of surfaces and re-pointing of mortar joints. But the main areas of preservation work undertaken were as follows:

North Bastion and Curtain Wall The first phase of preservation work at Bunce Island was focused on the curtain wall on the north side of the fortress. This section of wall is the most substantial at the fort and the area with the most severe problems. It faces the deep channel between Bunce Island and the mainland, which was the only side ships could approach from without running aground on the many mud flats that surround the island. There are two parts of the wall; the North Bastion or defensive tower adjacent to the gatehouse to the fortress: and the northern curtain wall. Preservation work on this section of the fort entailed: construction of a radial beam, connection of the radial beam to a large concrete block called an anchor or ‘deadman’, treatment of the soil fill between inner and outer bastion walls, and wall capping and lime render.
North bastion before preservation work and near completion: 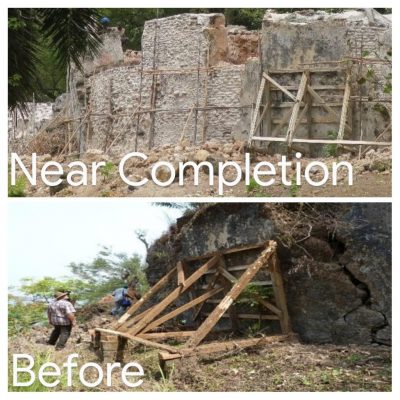 Bance House The second phased of the conservation program at Bunce Island commenced in November 2019 after the annual rains. Bance House is the most iconic structure at the site and at the core of the complex. Bance House was the official residence of the Chief Agent/Captain/Commander of the island and his senior ranking officers. Implementing repairs in a way that is safe, lasting and non-intrusive was the principle challenge at the Bance House and surrounding buildings.
Bance House before and after preservation: 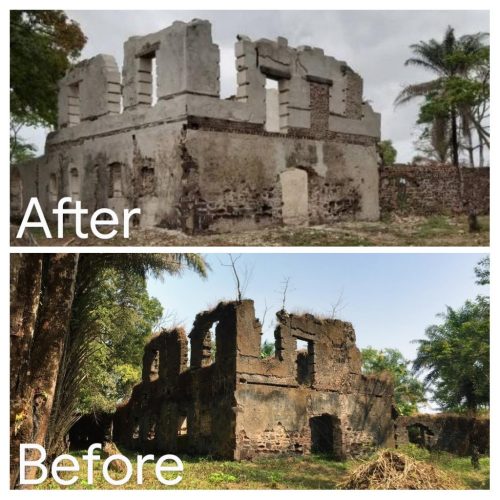 The Gate Tower The Gate Tower was the main entrance to the fort. From here, a pathway leads down to the remains of the original jetty from whence captives were transferred to ships moored offshore, facing death during the Middle Passage or a life of slavery in the Americas. The structure was in very bad condition at the outset of the project. Large fractures indicated that the walls were rotating, sections of masonry had collapsed, and a large tree grew out of one major wall, making it top-heavy and unstable.
The Gate Tower before and after preservation: 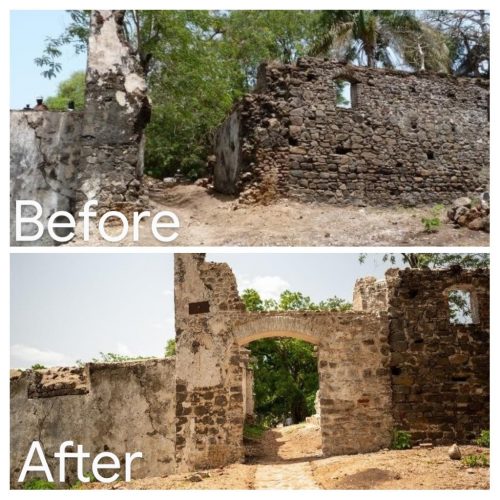 The Merchant’s Dormitory The Merchants’ Dormitory may be one of the oldest buildings in the complex. The structure bears evidence of modifications reflecting multiple episodes of reconstruction or renovation. The top floor was used as living quarters for lower ranking white officials and its ground floor to store trade goods.
Interior of the Merchant’s Dormitory before and after preservation: 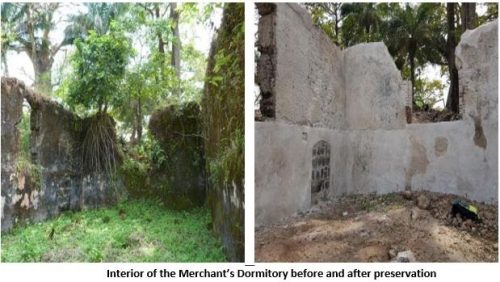 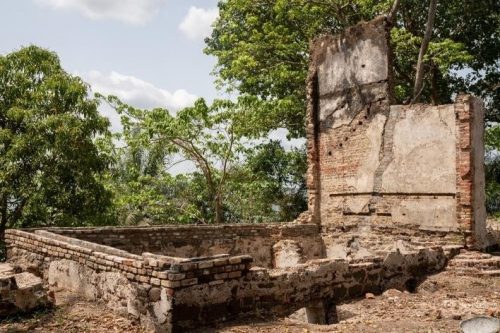 An important objective of the project was to improve the experience of visitors to the island to make it as rewarding as possible, without eroding the site’s authenticity.
Jetty One of the biggest obstacles for visitors to the island was the difficulty of getting from boat to shore at low tide when boats must moor far off the beach. Visitors had to either wade through the mud or accept a lift on the shoulders of one to the stronger boatmen.  In 2016 the Government of Sierra Leone allocated funds for construction of a new jetty.
Jetty at Bunce Island: 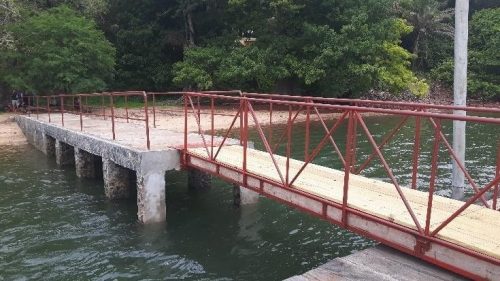 Visitor Route/Pathways A visitor route around the island was designed with paths and steps constructed. This creates a more friendly atmosphere and makes it easier to navigate the route around the fort. 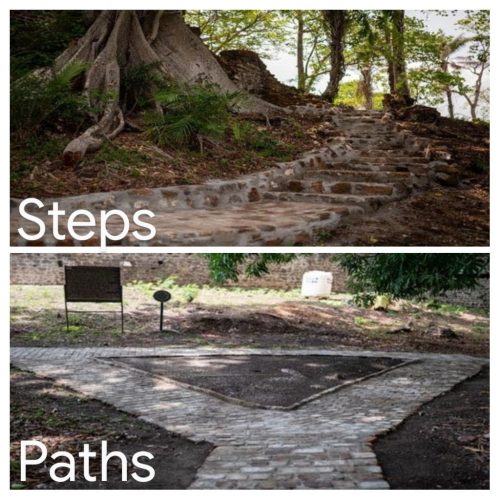 Toilets One of the main concerns expressed by visitors to the site was the absence of toilets. A new toilet has been constructed behind the existing Caretaker’s House, on ground that had already been disturbed and therefore did not contain any archaeological resources. No water is available on the island and the toilets are dry.
Visitor’s Center Conversion of the existing Caretaker’s House to house the Visitor’s Centre was also completed.
The visitor’s center and toilet: 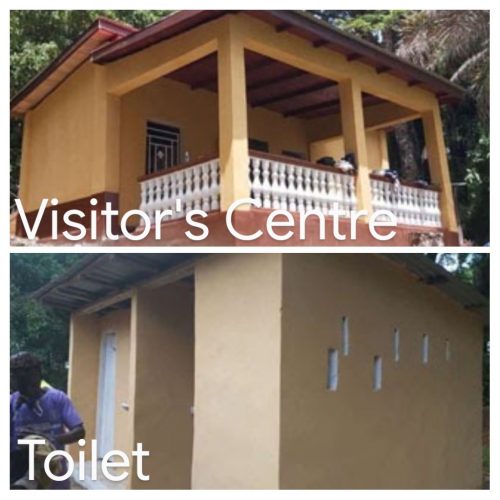 An outreach and education program was implemented by the Monuments and Relics Commission for schools in Freetown. Heritage Clubs benefitted from this program with a total of 133 students visiting the island.
Pupils of the St. Joseph’s Secondary School Freetown Heritage Club: 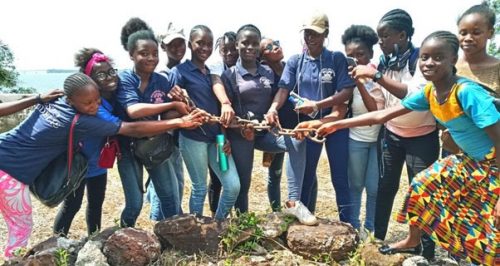 Training in repair and maintenance for local craftspeople was done during the project. This was based on the premise that the best practical training is done on site, through hands-on participation in the physical process of conservation – training through doing.
A total of 51 skilled craftspeople and laborers were employed during the project, of whom 8 were women. Workers were drawn from islands surrounding Bunce Island such as: Sangbulima/Tasso (35%) and Pepel (65%). Employing people from neighboring communities meant that benefits from the project are shared in different communities. Each of these communities have strong historical and cultural links to Bunce Island, and by employing people from these communities, the project ensured that none has a disproportionate share of any benefits.

Training of tour guides for Bunce Island was also done as part of the training component of the project. The Guides were instructed on the various stages of taking visitors through the ruins in a manner that tells a compelling story as well as educate the visitor. This was climaxed by the trip to the island when the Guides were taken on a tour and encouraged to use similar methods themselves.

In October 2019, World Monument Fund facilitated a Field Studio in Freetown for students and faculty from Columbia University, NYC, and Fourah Bay College (FBC). WMF has a long-standing relationship with the Heritage Preservation course at the Graduate School of Architecture, Planning and Preservation (GSAPP) at Columbia. Apart from the benefit local partners gain from the collaboration, engaging a US institution in AFCP activities broadens the impact of the grant to include a US constituency. Not only does this give the program an added dimension of relevance, it also presents a highly professional and expert outward face of an exemplary American institution to an international audience. As part of the Field Studio program, the students took part in a site visit to Bunce Island. Remarkably, none of the students and only one faculty member from Fourah Bay College had ever visited Bunce, and half of the FBC students had never even heard of the site!
Students from Fourah Bay College in Freetown and Columbia University visit Old Fourah Bay College

Expert Technical Team
The expert technical team for the project consisted of Tony Steel, a master stonemason and expert conservator responsible for leading conservation work on site; Melbourne Garber, a structural engineer with a long association with Bunce Island (he was born in Sierra Leone but is now based in New York); and Dr. Chris de Corse, a professor of anthropology at Syracuse University New York and an expert on the history and archaeology of Bunce Island, and Bossman Murrey the rescue archaeologist. The expert team also included Professor Abdul Babatunde Karim, a botanist and former Dean of the Faculty of Applied Science at the Fourah Bay College, University of Sierra Leone whose role was to advise on control of vegetation; Madam Isatu Smith, initially the Chair of MRC and later WMF’s Local Project Manager, who is a heritage professional with a detailed knowledge of the history of Bunce Island; and Desmond Jones, who was Site Engineer. Project management was led by Stephen Battle, who is WMF’s Program Director.
Staff of the Monuments and Relics Commission implemented the School Heritage Club Tours and the Chairman Charlie Haffner provided guidance.